AI platform raises $36 million in one minute during ICO

As the world progresses, so do the advancements of technology. The crypto industry has gained massive interest, especially in this year. Another fast-growing fascination is artificial intelligence (AI), and how it can be used to benefit businesses. 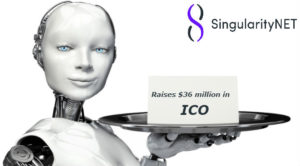 AI and machine learning (ML) are innovative ways to streamline processes while offering accurate and data-driven solutions. The former has an estimated value of $200 billion in this year alone, with that figure set to climb to $3.1 trillion by 2025.

SingularityNET, creators of Sophia the Robot, has built their platform with the aim of allowing anyone to capitalize on this lucrative industry. In a testament to AI’s popularity, the platform reached their ICO cap of $36 million in just one minute.

Initially, 20,000 people were registered to contribute, hoping to purchase a total of $361 million worth of the platform’s AGI token. However, SingularityNET drastically cut this number as explained in their press release:

“[Screening] all applicants using layers of algorithms, in addition to manual review, to comply with global KYC/AML regulations. This reduced the pool of contributors to 5,000, but also set a new standard for fundraising via blockchain with respect to global legislation.”

SingularityNET’s founder, Ben Goertzel, gave an example of how the decentralized platform could work with regard to problem resolution:

Even though it is clearly a booming industry, AI and ML seems to be centralized and controlled by larger corporations like Google. With SingularityNET’s decentralized approach, it makes using these tools accessible to everyone. The money made won’t just line the pockets of major companies as anyone will be able to access it and more importantly, capitalize on it.