Coinbase, Bitfinex, Bitstamp and GDAX, along with some of the largest exchanges in the cryptocurrency market, will reject Bitcoin Cash that is being pursued by some miners led by ViaBTC. 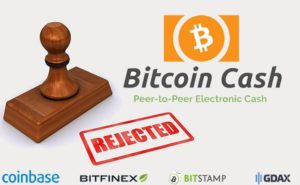 Initially, Bitmain, arguably the most influential mining equipment manufacturer in the industry and the operator of the largest mining pool Antpool, introduced Bitcoin ABC as a contingency plan against Bitcoin Improvement Proposal (BIP) 148.

Because BIP 148 entailed a user-activated soft fork to activate the Bitcoin Development team’s transaction malleability fix Segregated Witness (SegWit) which essentially removed the authority of miners over the bitcoin network, the mining community agreed on a contingency plan in case BIP 91 or BIP 141 will not be agreed upon.

The timing of Bitcoin Cash seems off. Miners agreed to BIP 141. #bitcoin businesses, users and investors are on the same page. Why now?

Despite the finalization of SegWit activation via BIP 91 and BIP 141, ViaBTC abruptly announced that it plans to pursue the creation of Bitcoin Cash with an active development team. ViaBTC’s announcement also caught Bitmain, the initiator of the project, by surprise and the Bitmain development team was quick to respond that Bitcoin Cash was merely a contingency plan, nothing more.

Considering the contentious nature of Bitcoin Cash, leading bitcoin exchanges including Coinbase, Bitfinex and Bitstamp announced that they will only be supporting the main bitcoin blockchain. More to that, most exchanges do not even plan to support Bitcoin Cash as an altcoin.

“In the event of two separate blockchains after August 1, 2017 we will only support one version. We have no plans to support the Bitcoin Cash fork. We have made this decision because it is hard to predict how long the alternative version of bitcoin will survive and if Bitcoin Cash will have future market value,” said the Coinbase team.

One of the leading bitcoin trading platforms that will allow users to withdraw an equal amount of Bitcoin Cash is Kraken, which will also support margin trading for Bitcoin Cash in the future.