​$8.5 million worth of Ethereum has been taken from addresses of FreeWallet and allocated to a single address. 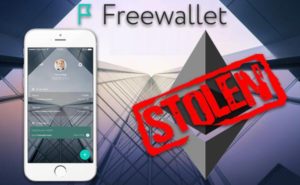 On June 13, users started to notice funds on their personal wallets leave to a single address. Based on current price of Ether, approximately $8.5 million worth of Ethereum has been sent to the wallet address “0x11b85b4E2FadAEbE04a251377AA35B9be3C785f0” from the Ethereum addresses distributed and managed by FreeWallet.

Analysts including prominent cryptocurrency trader and bitcoin investor Collin Crypto described the case as an exit scam conducted by FreeWallet. Other analysts such as PyCon 2017 organizer and TechCrunch journalist Jason Rowley stated that the theft of FreeWallet funds was a heist.

One member of an online cryptocurrency community suggested that FreeWallet has a connection to Bytecoin, Minergate and Changelly, all of which have presented sufficient evidence to be described as inefficient projects and companies. Bytecoin, the 11th largest cryptocurrency in the world, had major issues in the past due to its heavily pre-mined token. Such controversy led to a hard fork and the creation of Monero, one of the most popular and widely-utilized anonymous cryptocurrency.

Until FreeWallet made an official announcement, the vast majority of users and victims of the theft understandably assumed that the FreeWallet development team pulled off an alleged exit scam to steal millions of customer and user funds. Because If the loss of funds of FreeWallet Ethereum addresses was in fact a heist and a hacking attack, representatives of FreeWallet had toimmediately issued an official statement and launch an internal investigation into its system to discover how the funds were moved in the first place.

However, Alvin Hagg, the co-founder and CEO of Freewallet later clarified that the exchange moved user funds to a cold storage account due to Ethereum blockchain congestion caused by the Bancor Network ICO.

Ethereum Classic, a news source which operates the Twitter account eth_classic, told the cryptocurrency community that FreeWallet did not allow users to store their own key to begin with. There exists a major difference between a non-custodial wallet platform and a wallet platform which stores and manages private keys for users. If the latter is hacked, hackers can gain access to user wallets. But, if a non-custodial wallet is hacked, users still have access to their private keys and ultimately, their funds.

Although the FreeWallet team has issued an official statement in regards to the hack stating that the entire situation was planned from the start, users still had an issue with the exchange moving user funds without the consent of the users to begin with.

“Since the beginning of operations not a cent of user money was lost. Freewallet stores funds in a multi-signature cold storage with a bank level security grade. From time to time there are rebalancing procedures between different cold storages and hot wallets. There’s no need to worry, this is an ordinary procedure for cryptocurrency systems. All user assets are completely safe.”