How Segwit and Lightning Will Enable Low-Fee Bitcoin Micropayments

​The Bitcoin Core development team’s transaction malleability fix and scaling solution Segregated Witness (Segwit) is expected to optimize bitcoin block size by around 75 percent. In addition, Segwit provides an infrastructure for two-layer solutions such as Lightning that enables an ecosystem for micropayments that are substantially smaller in size in comparison to traditional bitcoin transactions. 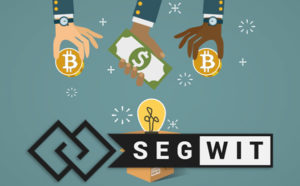 Lightning is essentially a payment channel which multiple users can utilize to transact many payments with zero confirmation and low fees. Upon the completion of a series of payments, one user can close the Lightning payment channel and broadcast it to the bitcoin blockchain as a single transaction. Such combination of transactions allow bitcoin users to engage in low-fee micropayments.

Over the past few months, miners have disagreed to the activation of Segwit. After some deliberation, Bitmain’s Antpool, BTC.com and other major mining pools have agreed to active Bitcoin Improvement Proposal (BIP) 91, which avoids the execution of a hard fork and activates Segwit as a soft fork solution.

The activation of Segwit would allow the implementation of the Lightning Network, which leading bitcoin and blockchain development firms including Bitfury have anticipated since mid-2016. Many startups and development firms including Zap have already introduced and demonstrated beta software built on top of the Lightning Network.

The Zap application enables anyone within the Bitcoin network to send zero-confirmation bitcoin payments instantaneously with the Lightning network. Jack Mallers, front end engineer at Label Insight, first introduced the demo app of Zap on social media earlier this month.

The app, which supports both Litecoin and bitcoin, allows users with an extremely simple user interface to set up a Lightning payment channel between multiple parties and settle bitcoin transactions with no confirmations and fees.

Only in the end when all the transactions are settled, the Lightning payment channel is closed and broadcasted to the bitcoin network with a single fee.

Upon the activation of Segwit, bitcoin transactions will become significantly cheaper, by around 75 percent. The optimization of bitcoin blocks will also help decrease the fees of Lightning payment channels, which will create a more efficient ecosystem for Lightning users.