​​The entire world has been abuzz about the total political and philosophical makeover Donald Trump is giving The White House in his first month in office. His ability to keep his word on campaign promises has also been rather unprecedented, as well, especially after such a short period of time. 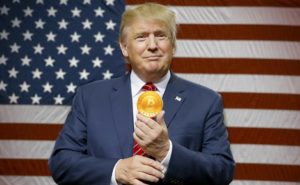 Now, President Trump seems ready to create the most pro-Bitcoin administration in history with his newest hire, by way of his Vice President Mike Pence, Mark Calabria. Mr. Calabria has served as director of financial regulation studies at the Cato Institute and was tabbed by Pence to become Pence’s “chief economist,” according to Politico.

Calabria gives “a voice around the (White House economic) table that will give them their philosophical true North,” said Jim Parrott, a senior adviser to former President Barack Obama’s National Economic Council. “Bernstein was in exactly the same role and was pretty influential in our world,” said Parrott. “He played the role on our team of representing an economist version of Biden.”

According to the report originally posted by Politico’s Lorraine Woellert, Calabria will take on a role similar to the one held by Jared Bernstein, who served as chief economist to former Vice President Joe Biden. Bernstein was a strong voice and public face for the Obama administration, speaking frequently on employment, economic inequality and the middle class.

Calabria is not a rookie when it comes to the political rigors of life in Washington. Before joining the Cato Institute in 2009, Calabria worked on Capitol Hill as a member of the senior professional staff of the Senate Committee on Banking, Housing, and Urban Affairs. Calabria has been outspoken about his views on the value of Bitcoin and its underlying blockchain technology.

“While I’m an economist, not a tech guy, I’m very excited about Bitcoin, as I am about alternative currencies in general, and perhaps even more interested in the blockchain,” in a 2015 interview.

He mentioned that Bitcoin was pretty popular over at the Cato Institute, saying “pretty much everyone at Cato, to varying degrees, is supportive of Bitcoin. A number of Cato staff own Bitcoin, as well as a few other alt-currencies.” When it comes to Bitcoin being taxed like a commodity in the U.S., Calabria was very negative on that concept and had some words on how he hoped this would change in the future, a future he has arrived in and can help influence from his new position.

“I’m not a fan of it. It’s obviously not a commodity in the strictest sense. There is an argument for subjecting it to capital gains taxes, in the same manner, you’d apply to a stock or bond, but I do worry that the IRS’s decision will complicate and slow acceptance. If its value relative to the dollar stabilizes, this becomes less of an issue. Of course, if lots of users start to use any capital losses to offset other income, I wouldn’t be surprised if the IRS reconsiders. I hope with a future administration (Trump) this gets reversed.”

Now, it would seem, Calabria has his chance to alter Bitcoin’s perception and governance for the better in his new position. His hire follows pro-Bitcoin additions that include Peter Thiel to Trump’s Transition Team, and Mick Mulvaney as his choice to become the head of the Office of Management and Budget, someone who has been educating Washington’s politicians for years about Bitcoin.

The U.S. Government will also be creating a Congressional Blockchain Caucus to further understand the value and capabilities withing the world of digital currencies and blockchain technology. The U.S. has had talks in the past with IBM about adopting a national digital currency. Nothing is expected anytime soon, as the U.S. is actually one of the most cash-friendly places in Western culture, but with many Bitcoin advocates joining the government, this may move those talks along.