Your Favorite Business Will Accept Bitcoin Soon - Here’s Why?

​Businesses love accepting Bitcoin. Recently, the Japanese Bitcoin exchange Coincheck told BitConnect that they have had little problem signing up over 2500 businesses to Bitcoin merchant accounts. As I’ll go over here, it’s easy to see why. The benefits can be huge. Why have major players like Overstock.com, Dell Computers, and Wikipedia jumped on the Bitcoin bandwagon when it was time to take a payment? Why are many, many more Fortune 500 companies going to follow their lead in the years to come, if they are smart? Find out below. 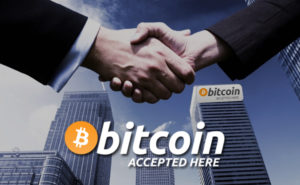 Why Wouldn’t a Merchant Accept More Ways to Get Paid?
Nothing brightens a merchant’s day more than to accept a payment for a job well done. We’ve evolved from a bartering system of pelts and livestock to the European accounting system of “Tally Sticks”. Gold and silver pieces have had their day, then were replaced by paper money redeemable for precious metals.

Nations around the world are slowly, but surely, starting to ban cash, and are beginning cashless societies. Now pure fiat currency (paper money not backed by anything) is heading to the end of it’s run due to convenience, national indebtedness, and a need to use terrorism as leverage to gain more control over the population and all of its dealings.

Using debit/credit cards for everything has some key downsides. For one, they are rife with fraud and identity theft costs. Just ask Target and Home Depot. Credit/debit cards are 1950’s technology not ready for the 21st century. These companies are now behind the times, dependent on technology that is becoming obsolete. These cards have several intermediaries that each can be hacked, stealing your information and account information. And these transactions have a cost of anywhere from 1-3% apiece.

Bitcoin has the same value in any country, as the world’s first global currency. You don’t have to carry them on-hand, increasing user security. It is designed to increase in value over time, as an anti-inflationary medium of exchange that relies on “sound money” principles like supply and demand. And you can use it as a store of value, or a way to send information. A pure investment vehicle, or a way to buy goods and services, with many more security options than were ever previously available.

So why are the major players moving in Bitcoin’s direction?
Because it makes sound business sense to do so. It has shown seven years of growth as a store of value. If Bitcoin didn’t, it wouldn’t be used by millions of people today.

Companies like BitPay and Coinbase will convert BTC into dollars at the end of the day if a business is squeamish about market fluctuations. You attract a new market segment and revenue stream you normally wouldn’t access commercially. You build your brand as one that is on the cutting edge of technology. But these are all secondary to the primary benefit. Costs.

The average Bitcoin transaction costs 0.0001 BTC to perform (click here for details) while a credit card will cost a merchant around 3% on average. This 3% pays the merchant processor and provides coverage for things like fraud and identity theft protect and merchant terminal costs. Let’s say your average transaction is $20. That means it costs you $0.60 to obtain $20, leaving you with a net of $19.40. The costs of doing business.

Never mind all the other costs a merchant has to account for throughout the day (Employees, benefits, insurance, taxes, rent, “shrink” (theft), the costs of the goods themselves, etc.). Merchants are ALWAYS looking for ways to cut costs, thereby increasing actual net revenue. That’s where Bitcoin comes to the rescue.

Let’s take Overstock for example. If Overstock accepts a credit card, he knows that is an average 3% “cost of doing business,” per debit card transction. The card company may cut him a deal on the actual transaction rate at 2%, but he wants more fraud and theft protection, given the nature of his business and the high costs per transaction, so let’s call it 3% per transaction, with more insurance purchased. Let’s say the average check-out amount is $50 USD. Three percent of $50 comes to $1.50.

If they accept the same payment by Bitcoin, with a cost of 0.0001 BTC, this will translate to a cost just a couple of cents. Overstock just saved pretty much the entire $1.50 on each Bitcoin transaction. Since Overstock does hundreds of millions of dollars of business, annually, you don’t need to be a math major to see how that can grow their bottom line quickly.

Why Retailers Should Keep Some Revenue in Bitcoin
Don’t even consider the options Overstock has if they didn’t convert ALL of their BTC into dollars at the end of the day. The real annual inflation for the USD is around 5% a year, while BTC appreciates at about 40% so far in 2016. This means if Overstock holds just a few percent of Bitcoin in the account annually, he also comes out ahead on the back end, instead of losing money every year holding everything into a depreciating currency known as U.S. Dollars.

It’s a win-win situation for Overstock, and for the consumer, who pays a lower price because Overstock doesn’t have to pass the “costs of doing business” onto the consumer. Overstock can now charge 3% less going forward, and attract MORE consumers!

Microsoft, Wikipedia, and Overstock are not just payment pioneers, but leaders of a pack of super-merchants heading Bitcoin’s way. Any merchant that is worth their salt would have very little reason not to incorporate Bitcoin into their portfolio, once they perform their due diligence. Fortune 500 companies didn’t get to be market leaders by paying higher operating costs than their competitors.

Businesses love accepting Bitcoin and will continue to move in this direction for the foreseeable future. Selling Bitcoin to merchants should be as easy as selling snow boots to Eskimos. Once affiliate programs in the Bitcoin space, or the altcoin space, become more common, people will have an incentive to drive Bitcoin merchant adoption, and the world becomes a much cooler place to shop in.

I think the world will be a much different place for Bitcoin by the end of the decade. Bitcoin business in your favorite store will be much more commonplace, through their websites and in person, with faster options like The Lightning Network speeding things along. Get ready to be on the right side of history.